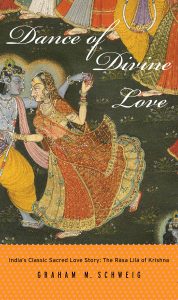 This is a lucid translation of the five-chapter dramatic poem of the Rasa lLila – the sacred love story — found in the Bhagavata Purana. The rasa lila, Krishna’s dance with his female devotees, is the most famous divine love story in India. The story is often considered analogous to the expression of the eternal soul’s loving union with the Supreme Deity and seen as an invitation to join the divine play in the eternal realm.

In his Foreword, Norvin Hein, Professor Emeritus of Comparative Religion at Yale University writes, “Connoisseurs increasingly acknowledge that we have here a poem entitled to world esteem.”

The book is divided into three sections. An introduction, the translation of the poem, and textual illuminations.

The first section orients us as to how to view the Rasa Lila, which is an exchange of the highest spiritual love that is free from lust and other polluting material emotions.

The author points out some similarities between the Rasa Lila and the Song of Songs from the Semitic tradition. “As the Song of Solomon has been elevated to the highest status above all other biblical books by many Jewish and Christian mystics, and thus has become known as the “Song of Songs,” the Rasa Lila also has been honored as the “essence of all lilas,” and the “crown-jewel of all acts of God” by several Vaishnava traditions, for which it functions as the ultimate revelation of divine love.

The middle section, which is the literal translation of the poem, is presented as a five-act play with two additional poems that pertain to the story. The poetry of the Bhagavata Purana is sophisticated and there are many nuances of meaning. To be able to keep the essence of the Sanskrit meaning and transfer its poetics into English is not a small feat and this is a masterful translation.

The third section discusses the background of the poem, aspects of the story, and the meaning of the poem.

For me, who am passionate about Bhakti, this is a must-have book. While it is a scholarly edition it is not difficult to follow or dry and is a good entry into a source text.