Diet for Transcendence: Vegetarianism and the World Religions 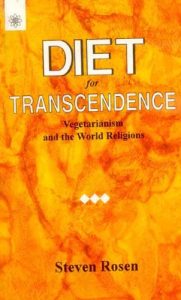 Diet for Transcendence: Vegetarianism and the World Religions by Steven Rosen

This book was first published in 1997 and received critical acclaim from religious leaders of many traditions who acknowledged that all traditions find their roots in vegetarianism.

“No practicing Christian, Jew, Buddhist, Hindu, or Muslim can ignore the imperative of this inspiring book,” writes Roshi Philip Kapleau of the Zen Center in New York.

The Introduction reveals the ample evidence of modern medicine about the dangers of meat eating, the protein myth, and meat eating and world hunger. Interestingly, Rosen doesn’t discuss the ecological impact of the slaughterhouse industries, which has now become well known and a significant reason to take up a vegetarian or vegan lifestyle.

This is a well-research book and I believe Rosen has successfully shown that there is much in all the major religious traditions that endorse vegetarianism and the compassionate treatment of animals.

Followers of different religious paths may discover new quotes from their own texts about meat eating.