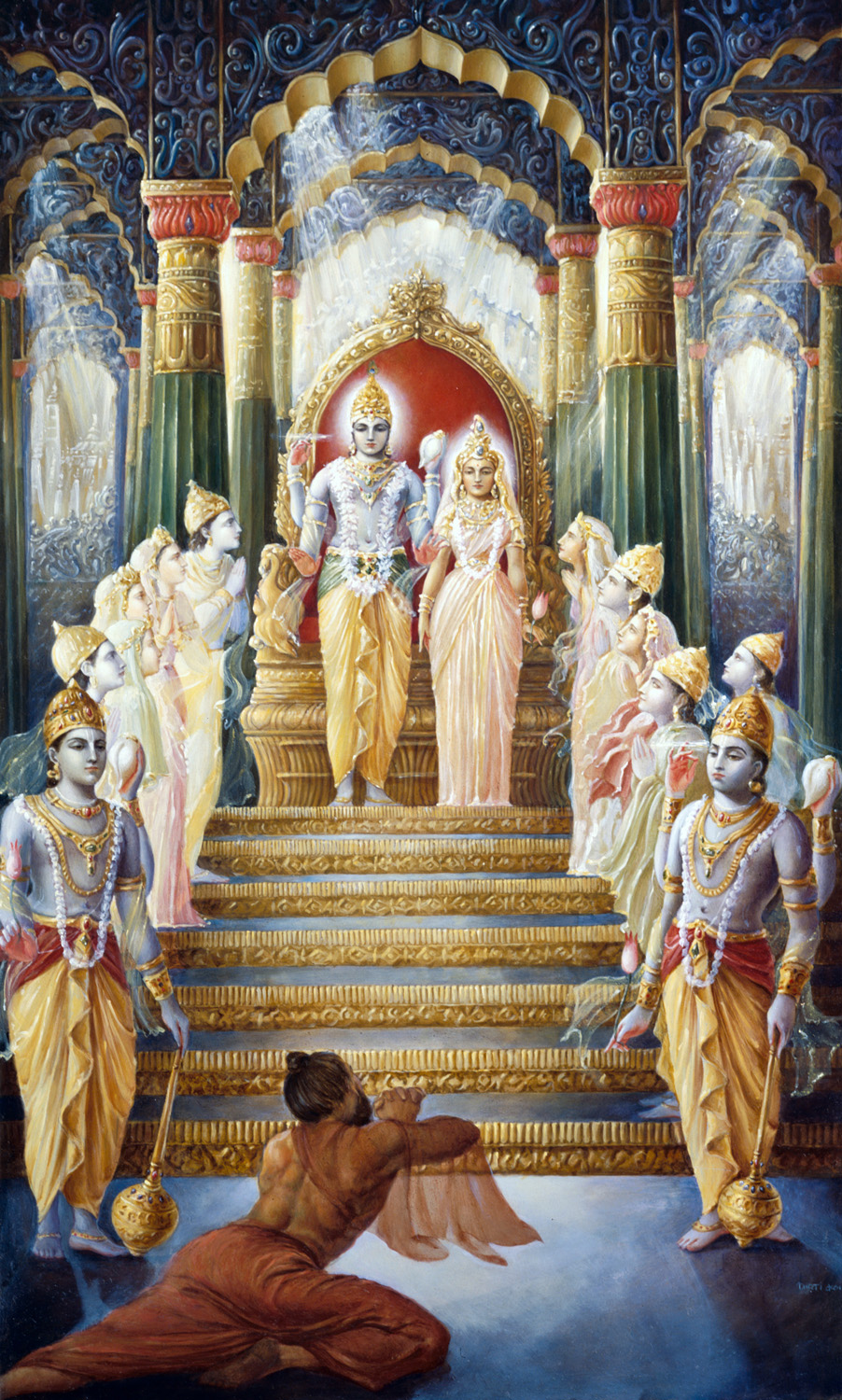 In Prema Kirtan: Journey into Sacred Sound, I mention that there are various manifestations of divinity. Here I discuss them in further detail.

The Supreme Absolute manifests himself in countless ways. For many unfamiliar with the yoga universe, this can be confusing, and their perplexity spills into kirtan, coloring it with shades of mukti, or liberation, instead of prema.

In chapter two of Prema Kirtan I state that there are two types of spiritual goals. Mukti is the liberation of self-realization. In prema, the soul achieves the attainments of mukti but also receives a divine body and identity so in which to reside in the spiritual planets and engage in a loving relationship with the Supreme Person and the other transcendental residents there. To understand the difference between mukti-kirtan and prema-kirtan, we need to make sense of all these manifestations of the Supreme Absolute.

It’s invigorating to breathe in the fresh, crisp air of a universe alive and rich with meaning, so let’s pause a moment to consider these insights. You’ll end the chapter with a better grip on the world according to yoga philosophy and probably find your worldview widened.

The One; The Many

While there is only one Reality, the Reality manifests in many ways. We’ll start with the Absolute’s singular nature. Reality is the supreme spirit whole, nondual, without a second, all-powerful, and independent. The Svetashvatara Upanishad (6.2, 6.11) states:

He by whom this whole world is constantly enveloped
is intelligent, the author of time, possessor of qualities (gunas), omniscient.
Ruled over by him, work [karma] revolves –
this which is regarded as earth, water, fire, air, and space!

The one God, hidden in all things,
all-pervading, the Inner Soul of all things,
the overseer of deeds [karma], in all things abiding,
the witness, the sole thinker, devoid of qualities (nirguna).

Among all the eternal, conscious beings,
there is one Supreme Being who supplies the needs of everyone else.
The wise souls who worship him in his abode
attain everlasting peace. Others cannot.

Although the Supreme is one, the foundational cause, and self-satisfied; he manifests many expansions of himself to enjoy variously in the spiritual sky known as Vaikuntha, that place which is free from kuntha, anxiety and limitation. The spiritual region has unlimited planets. He resides on each planet in a different form. In other words, there is much beyond our little universe!

The Supreme manifests in different features as expansions, shaktis, avataras, and representatives, and each has specific functions.

I’ll use the rest of this chapter to give a brief overview of all these manifestations. Then in the next chapter, I’ll explore where in the cosmos these personalities reside and where kirtan to those personalities can take us.

Lord Rama is a well-known and beloved expansion of the Absolute in India. Perhaps you’ve heard of the epic, Ramayana, which the Indian people have recited for millennia. Millions of children are raised with bedtime stories of Lord Rama. Rama is known for his virtue, purity, chivalry, steadfastness in the face of adversity, and winning over the forces of evil. Hanuman, Rama’s devoted servant, performs extraordinary acts of devotion for Lord Rama and inspires millions to follow his example, even today. Rama lives with his wife, Sita, Hanuman, and his family and friends on the Vaikuntha planet, Ayodhya. He comes to this world to call the devoted to him. It’s common in kirtan to hear the chant jaya rama sri rama, jaya jaya rama. And we have the highly popular song, the “Hanuman Chalisa.”

Paramatma – God, the Great Soul or Oversoul – is an expansion of Vishnu technically called Kshirodakshayi Vishnu. Another form of the Paramatma is called Garbodakshayi Vishnu, which is the Vishnu mentioned in the triad of universal gods (Brahma, Vishnu, and Shiva). In fact, there are unlimited Vishnu and Narayana expansions in the Vaikuntha planets. There are a number of chants dedicated to Vishnu and Narayana, but we don’t often hear them in Western kirtans.

In addition to expansions of himself, Bhagavan has unlimited shaktis, or energies. In Bhakti Shakti I elaborately describe Bhagavan’s three primary energies, how they relate to one another, and how energies are personified according to the Vedanta worldview. In summary, the three energies are:

Sri Radha is the personified energy of Bhakti. Bhakti Shakti: Goddess of Divine Love is about Sri Radha, and she is mentioned throughout Prema Kirtan: Journey into Sacred Sound.

Durga Devi is a widely popular goddess. She is the supreme mother of all material universes, and is why she’s often referred to as the supreme form of divinity. Her devotees lovingly address her as Maa, or Mother. She is the personification of the deluding force of the material world and is responsible for creating illusion for the atma in response to its desire to try to enjoy matter. Her influence is spread throughout the universe, and she has captured every soul in it. Chants to her are regular features of kirtans.

In chapter eleven of Prema Kirtan and chapter seven of Bhakti Shakti I write extensively about the jiva, or atma (soul). Atmas are individual souls — us. Jiva-shakti is an intermediary shakti. The word intermediary indicates that jivas can choose to exist in the material or spiritual worlds.

In addition to these expansions and shaktis, Bhagavan has unlimited avatars. Avatara is a Sanskrit word meaning ava, “down,” and tri “to cross over” – or “one who descends” or “one who crosses over.” The Supreme repeatedly comes to this world from Vaikuntha to give knowledge and call us to our spiritual potential.

Ten avatars, known in yogic texts as the Dasavatars, are well known in India. The beautiful hymn, “Dasavatara Stotra,” appears at the beginning of Jayadeva Goswami’s Gita-Govinda. [https://www.youtube.com/watch?v=qzghm8jIj9A].

The Western world is not familiar with most of these avatars, so we don’t often hear mantras or songs dedicated to them sung in Western kirtans.

Finally, the Supreme has unlimited representatives – the devas, who administer the material world are one such group. Ganesh, son of Shiva and Parvati, is a famous deva, and you may encounter mantras and lyrics glorifying him. He removes the material obstacles of those who petition him and so is honored at the start of all Hindu rites and ceremonies to ensure an auspicious beginning and to ward off evil. In India you’ll see him worshiped by many shopkeepers, who seek his blessings to grant fortune in their sales transactions. And we hear of other devas, such as Indra, Agni, Vayu, Surya, Saraswati, and Lakshmi, but we don’t generally hear them sung about in kirtan.

Lord Shiva is the greatest among the Supreme’s representatives. He is a member of the triad of universal gods (Brahma, Vishnu, and Shiva), and is in charge of the dissolution of the universe. He affectionately awards material blessings to anyone who worships him. Just like Durga Devi, his consort, there are many songs and mantras for and about him.

The Brahma-samhita describes that the mundane egoic principle originates from Lord Shiva, and he embodies the material causal principle. He is the form of Krishna in touch with the material energy, or Durga. Shiva and Krishna are not the same person, nor are they completely different. The Brahma-samhita explains: kshiram yatha dadhi vikara-vishesha-yogat, sanjayate na hi tatah prithag asti hetoh – the two are like milk and yogurt. Milk is transformed into yogurt by adding a culture. Yogurt therefore comes from milk and is ultimately made of milk, but it’s not the same as milk and cannot be used in exactly the same way.

Shiva is a perfect yogi and is always meditating. The Bhagavata describes that, as the greatest of those devoted to Bhagavan Sri Krishna, Shiva perpetually meditates on him.

Each of these great personalities has immense power but, like us, are sheltered by the Supreme Independent, the nondual Original Person, who is their source. The yoga tradition doesn’t view these personalities as mythological or archetypal symbols, standing in as metaphors for something in the world or in us; they are real persons. The Vedic texts that have introduced these personalities aren’t whimsical musings but roadmaps to enlightenment, sophisticated explorations of the cosmos and consciousness. These texts have attracted the attention of the most brilliant minds throughout history. Erin Schrödinger found inspiration in the Vedic texts as he struggled to comprehend quantum physics. Many a philosopher of mind has found insight on consciousness, considered the most perplexing area of philosophy, in the Vedic presentations of it.

If we see the devas as imaginary, we may need to acknowledge that we’re projecting Western post-enlightenment thought on the yoga tradition. None of the hundreds of thousands of verses within the corpus of sacred texts refers to these persons as myths, symbols, or metaphors. Why would we chant mantras dedicated to, or the names of, these great personalities if they were mythological? Who’d bother? And why would the person in the mantra respond to us if we thought them imaginary beings, reflections, perhaps of natural powers or the god or goddess “within”? If we chant with such a conviction we won’t experience the truth of the mantra, and there would be little reason to take up a mantra practice.

These personalities are real, and those who take up a serious mantra meditation and kirtan practice can meet them and experience the dimensions where they reside. If we trust the accounts of sober, dedicated sages, seers, and saints through the millennia, we’ll be encouraged to take up the mantra-chanting experiment ourselves.