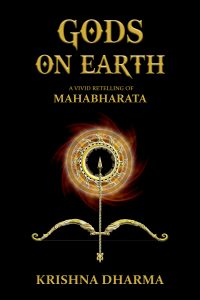 Gods on Earth, The Mahabharata retold by Krishna Dharma

The longest poem ever written, the Mahabharata is ten times the length of Homer’s Iliad and Odyssey combined. Try to wrap your head around that! Luckily this is condensed version of the massive 100,000-verse original, and it’s told very well.

The Mahabharata unravels a massive sociopolitical drama that is absolutely spellbinding, replete with romance, intrigue, politics, astrology, and martial arts. It is a story unlike any other and few books have survived as long as this 5,000-year-old epic.

This epic includes the Bhagavad Gita a masterpiece of spiritual knowledge adored by millions of thinkers, seekers, and philosophers the world over. Though we have many translations of the Gita, and it is a well-known work, we don’t have many Mahabharatas for Western readers, which is the narration of the factual events leading up to the speaking of the Gita.

Steven Rosen writes, “The text holds up mirror in which we can gaze upon our human frailties and higher aspirations. It illuminates our darker side and brings us into the light of God consciousness. It deals with selfishness, deceit, dishonor, and atheism. But it also shows the way to selflessness, truthfulness, honor, and the essence of theistic bliss.

This is a book everyone should read at least once in their life.