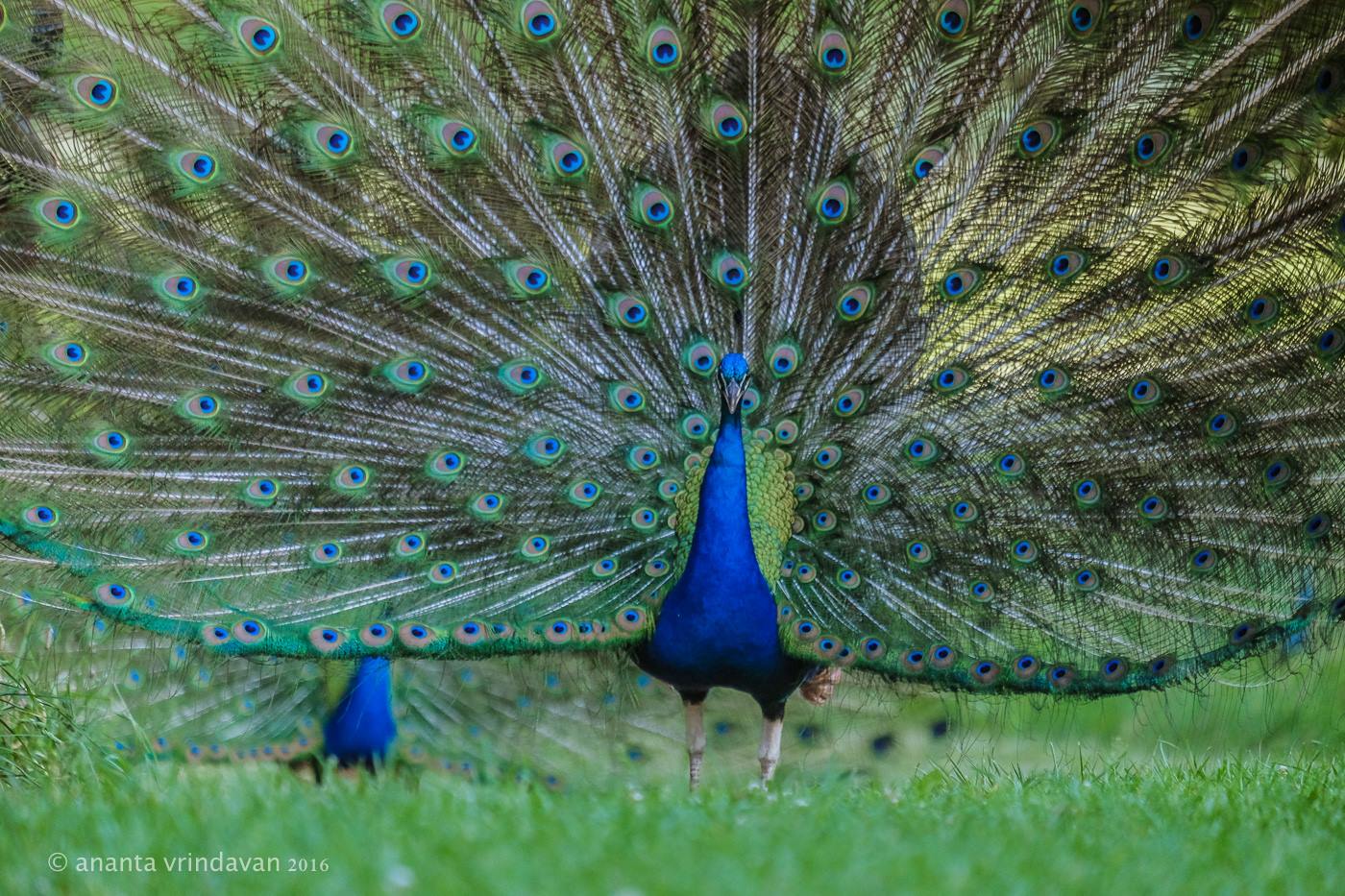 Kirtan is the musical form of a mantra meditation that is done as a call-and-response song with a group of people.

Born of love, the call-and-response kirtan-song using sacred mantras is the expression of the soul proper. In kirtan we’re calling out to our Beloved in separation. The song of prema-kirtan (the particular kirtan that seeks divine love as its ideal) has the power to carry us into the land of love to be united with our Divine Other.

Kirtan and japa are the two most powerful practices of Bhakti yoga, and we’ll understand why this is so as we become aware of what a mantra is, what it does, and the nature of sacred sound.

A mantra is a sacred sound formula. Man means “mind” and tra means “transports,” or “freeing.” A mantra is a method, or vehicle, used to control the mind, carry us to the inner world, and simultaneously unveil the reality of our true self and our Source.

The book Wise-Love has a wealth of information about sacred sound. There I write, “Just as there is material sound that can, with correct vibration and energy (or frequency), break glass or disorient or incapacitate a person, so there is spiritual sound capable of clearing the path that leads to the self and the spiritual world.

All the yoga systems agree that sound is the root element of the world. In other words, Vedanta explains that all potential for the material world is contained, in seed form, in sound.

The concept of something small or seemingly insignificant creating something grand and complex is not foreign to us. The largest known tree, a sequoia, germinates from a seed the size of a flake of oatmeal. You can’t see a sperm with the naked eye, but when it fuses with the ovum, the two cells create the complex human body.

Sacred sounds of the conscious world come into the material world with the purpose of calling us home, just as a lighthouse on land signals to boats at sea, assuring them of safety while showing the way.

Ancient Vedantic texts describe that sacred sound originates from the world of consciousness, or the land of spirit. Mantras are not ordinary sounds. They are sounds that work internally, changing our inner tendencies and impressions.

In Music as Yoga, Patrick Bernard writes, “It is universally recognized that sound has the power to draw the consciousness out of sleep, to awaken it. Who has not experienced the ringing of an alarm clock? Along the same lines, the soul asleep in the bed of the physical world can awaken to real life through spiritual sound vibration.”

When we meditate we attempt to slow, calm, and control the mind and induce physical relaxation responses. Meditation has been shown to improve psychological balance and increase our ability to cope. Numerous studies have proved the efficacy of secular meditation.

And of course, there are traditions, such as Buddhism, that use meditation practices extensively for their spiritual path. Therefore we have serious practitioners who testify to the power of meditation.

If you’ve ever tried to meditate, though, you might have found it difficult to sit completely still and empty the mind. Perhaps you eventually gave up trying to meditate. The restless mind is a most competent competitor making meditation very challenging, nearly impossible. Luckily, mantra meditation is easier.

While chanting a mantra your mind is directed to focus on the mantra. We’re not simply trying to stop the mind from its normal function.  In mantra meditation you give the mind positive engagement instead of telling it to be quiet and sit in the corner.

And because you’re using a mantra, the mantra itself empowers your meditation and accomplishes transformations that would otherwise be very difficult or take a long time.

Kirtan done with a group of other sincere souls is genuinely a joyful practice. When we call from the heart and raise our voices together with others in kirtan, we’re lifted onto a soaring plane of delight. It is a most potent form of meditation that simultaneously brings about feelings of universal brother- and sisterhood.

In 2011, Yoga Journal asserted that the American kirtan revolution is “spreading a compelling form of positive, spiritual music around the country and, increasingly, the world.”

Not all mantras are created equal.

According to Vedanta, universal time is cyclical. We’re currently in the season known as Kali, a particularly challenging time riddled with quarrel and hypocrisy.

While spiritual pursuits always take effort, during Kali they’re especially daunting, and few can take the journey. To help, the Upanishads highlight the sound – out of millions of their sacred sounds – that has the power to remove all the troubles of this age and resolve our own shortcomings.

The sound is known as the maha-mantra, or great mantra. Maha means “great.” We may recognize it from the familiar word mahatma, or “great soul.” This mantra is maha, or great, because it contains all the potency of all sacred mantras. Known as the great chant for deliverance, it’s unexcelled by any other mantra and is the swift deliverer of all the physical, psychological, and spiritual benefits of Bhakti we discussed in What is Bhakti?

No other mantra is so described in all of Vedanta.

The Hare Krishna maha-mantra is the vessel, the sail, and the wind carrying us into regions far beyond the material modes of nature, the limitations of our own minds, the stranglehold of the false ego, and the boundary of the celestial vault. It is the supreme purifier of our heart and energizer of our soul.

The Kali-santarana Upanishad states, “These sixteen names destroy all the degrading, illusory effects of Kali [the current age]. In all the Vedas, including the Upanishads and their corollaries, one can find no higher or more sublime way to attain spiritual perfection than chanting these names.”

When we’re willing to turn away from the false ego to experience the full potential of our true self, invoking mantras becomes a sophisticated spiritual practice and a powerful gift.

Who Is the Father of Kirtan?

Sri Chaitanya was an ecstatic mystic of the 16th century who galvanized the Bhakti school centered on the kirtan of the Hare Krishna maha-mantra. He lived a life of ideal devotion, demonstrating how to live a practice infused with Bhakti.

He showed that the most joyful and powerful yoga practice is kirtan of the holy names of the Supreme Person. The modern world agrees: kirtan has become a beloved practice in the yoga community and elsewhere, having found its way into many traditions over the centuries.

In Sonic Spirituality, Steven Rosen refers to Chaitanya as “the father of sacred chant as a yogic science.”

If we know the sound of the maha-mantra comprehensively by singing and reciting it with love, we can cross the ocean of nescience and reach the shore of deathless existence.

Kirtan and japa of the maha-mantra, when chanted with an understanding of the mantra, are known as prema-kirtan and can awaken divine love in the heart, as exemplified in the life of Sri Chaitanya.

He sometimes swooned, falling into ecstatic trances when he simply heard the Hare Krishna maha-mantra. When he chanted, he danced in ecstasy and his body underwent ecstatic transformations. Tears poured from his eyes, and he had goosebumps. The natural golden hue of his skin would change. Sometimes he’d be stunned, and sometimes he’d roll on the ground, unaware of his surroundings. It took significant effort on the part of his disciples and followers to bring him back from these ecstatic states. Chaitanya’s remarkable bodily transformations were not rare events but daily occurrences, as recorded in his numerous biographies written by the elite intellectuals, litterateurs, ministers, and nobles of his time.

Chaitanya’s life demonstrates that by absorbing our thoughts in remembering the names, activities, forms, and qualities of the Supreme in feelings of longing for him, we’re quickly drawn into the company of our Beloved in ecstatic joy.