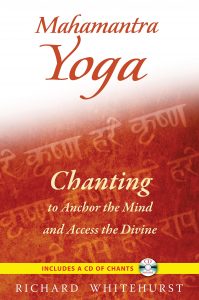 Reading this book is an experience. Even without ever having participated in a kirtan (call-and-response sacred song) or doing japa (private meditation) of the Hare Krishna mahamantra, you can have a glimpse of the practice and its powerful possibilities.

In the Foreword, Edwin Bryant, Professor at Rutgers University, aptly writes that Mahamantra Yoga is unique and “in addition to its role as a prescriptive compilation of classical instructions of chanting technique, . . . also provide an inspirational first-personal narrative of the author’s own chanting experiences.”

If the experiences described were ordinary, this may be less than interesting, but Richard Whitehurst manages to convey the experience (and thus the potential for each of us) of advanced stages of mystical meditation, calling us to reach realms of wonder we dream of.

Most of us intuit that we are capable of –and should be destined for — much more than we’re manifesting in our lives right now. If our intuitions are more than fleeting sentiments, we seek a way to realize our instincts.

Richard has shown us a way here and thereby proved the unique contribution of mahamantra meditation within the contemporary sphere of spiritual opportunities.

I think there’s a mystic in each of us and mahamantra meditation can bring us to realized states of advanced consciousness.

James O’Dea, teacher, author, visionary activist, and former president of the Institute of Noetic Sciences writes, “Richard Whitehurst’s Mahamantra Yoga is nothing less than a chalice of pure form that contains the elixir of highest truth. This book is magical, alchemical, and cut like crystal. It is a cleansing waterfall of light, sound, and spiritual resonance.”

This book is for beginners and advanced practitioners.

From the back cover:

Part of the bhakti devotional tradition, mahamantra yoga is considered the best path to self-realization in the current age, offering a doorway into the hidden recesses of our innermost being–the internal forest of the heart.

Citing ancient Vedic texts and the insights of perfected mahamantra yogis, Richard Whitehurst reveals the methods of mahamantra yoga and his own profound experiences based on more than 20 years of intense practice.

The book also contains a CD of three mahamantra kirtans, a group method of the chant. Richard says in these recordings you will encounter “an entire spectrum of the moods and characteristic of authentic mahamantra yoga kirtan meditation.”