Swami in a Strange Land: How Krishna Came West 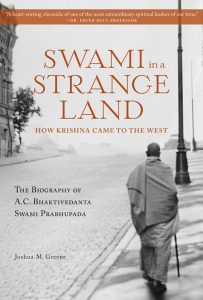 Swami in a Strange Land: How Krishna Came West by Joshua Greene

Green is a master storyteller and diligent historian and this biography of A.C. Bhaktivedanta Swami Prabhupada is enthralling.

This is the unique and compelling true story of A.C. Bhaktivedanta Swami, a modern-day spiritual giant and Bhakti saint. At 70 years old, penniless, he traveled by sea to the United States carrying with him the order of his guru, some copies of his English translation of the Bhagavata Purana (never before seen by English speakers), and unshakeable faith in God’s holy name.

After two intense years of struggles—having his manuscripts and typewriter stolen and his life threatened by a drug-crazed hippy, he lived in the bowery without any perceivable support, he persevered to ignite the worldwide explosion of kirtan and Bhakti philosophy that attracted millions of followers and forever changed the spiritual landscape by introducing Bhakti for the first time to the West.

Many notable people share their appreciation of Swami’s childlike simplicity and humility. Harvey Cox writes, “Srila Prabhupada was, of course, only one of thousands of teachers. But in another sense, he is one in a thousand, maybe one in a million.”

The author personally knew Prabhupada and is a devoted follower of bhakti, but this doesn’t color the text with sentimentalism.